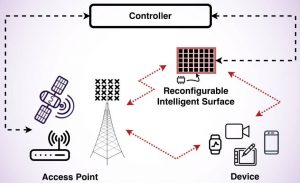 “RIS is a new type of system node leveraging smart radio surfaces with thousands of small antennas or metamaterial elements to dynamically shape and control radio signals,” according to the organisation.

The surfaces can be used to modify system coverage or capacity, as well as for localisation or sensing.

“As an example,” said ETSI, “a RIS can reconfigure the radio environment to sense human posture and detect someone falling – a useful application for elderly care. RIS is expected to serve as a key technology in future wireless systems including for 6G.”

ETSI sees them being implemented with mostly passive components and, overall, be less expensive than “fully stacked cells relays”, it said.

Working from under 6GHz to THz, they could be used indoors or outdoors and be integrated into things such as signs.

To support its specification efforts, ETSI has created ISG RIS, the Industry Specification Group on Reconfigurable Intelligent Surfaces, chaired by Arman Shojaeifard who works for InterDigital Europe where he leads the next-generation RAN Group in London.

He is also the coordinator of the Innovate-UK/Celtic-Next collaborative European project on AI-enabled massive MIMO.

“There are many technical challenges that need to be adequately addressed before RIS can be adopted into future standards, towards commercialisation of the technology, and the ETSI ISG RIS aims to identify and address some of these challenges,” said Shojaeifard.

ETSI can be found here