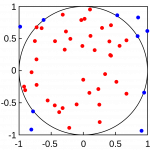 Monte Carlo integration – the process of numerically estimating the mean of a probability distribution by averaging samples – is used in financial risk analysis, drug development, supply chain logistics and and other application.

“We are now capable of achieving what was previously only a theoretical quantum speed-up,” says CQC researcher Steven Herbert, “that’s something that none of the existing quantum Monte Carlo integration (QMCI) algorithms can do without substantial overhead that renders current methods unusable.”

’This paper proposes a method of quantum Monte-Carlo integration that retains the full quadratic quantum advantage, without requiring any arithmetic or the quantum Fourier transform to be per- formed on the quantum computer,’ says the CQC announcement, ‘no previous proposal for quantum Monte-Carlo integration has achieved all of these at once. The heart of the proposed method is a Fourier series decomposition of the sum that approximates the expectation in Monte-Carlo integration, with each component then estimated individually using quantum amplitude estimation. The main result is presented as theoretical statement of asymptotic advantage, and numerical results are also included to illustrate the practical benefits of the proposed method.’

CQC’s paper can be red here.