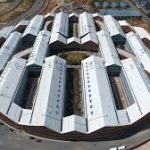 Researchers from Skoltech, KTH Royal Institute of Technology, and Uppsala University have predicted the existence of antichiral ferromagnetism, a nontrivial property of some magnetic crystals that opens the door to a variety of new magnetic phenomena.

Chirality, or handedness, is an extremely important fundamental property of objects in many fields of physics, mathematics, chemistry and biology; a chiral object cannot be superimposed on its mirror image in any way.

The simplest chiral objects are human hands, hence the term itself. The opposite of chiral is achiral: a circle or a square are simple achiral objects.

Chirality can be applied to much more complex entities; for instance, competing internal interactions in a magnetic system can lead to the appearance of periodic magnetic textures in the structure that differ from their mirror images – this is called chiral ferromagnetic ordering.

Chiral crystals are widely considered promising candidates for magnetic data storage and processing device realization as information can be encoded via their nontrivial magnetic textures.

Anastasia Pervishko, research scientist at the Skoltech Center for Computational and Data-Intensive Science and Engineering (CDISE), and her colleagues used symmetry-based analysis and numerical computations to predict the existence of antichiral ferromagnetism – a kind of ferromagnetic ordering when both types of chirality (handedness) exist simultaneously and alternate in space.

“In contrast to chiral and achiral textures, we predict a fundamentally different magnetic ordering in tetrahedral ferromagnets. We use the term ‘antichirality’ to highlight the spontaneous modulation of magnetization direction with a spatial chirality alternation between right- and left-handedness induced by crystal symmetry,” Pervishko says.

She explains that the chirality in this periodic magnetic texture alternates in space while the average torsion invariant is zero. “One can picture it as a magnetic modulation where some part is characterized by right-handedness and the other by left-handedness; that differs drastically from conventional chiral textures where handedness is preserved,” Pervishko adds.

The team showed that antichiral ferromagnetism can be observed in a class of crystals in which many minerals are formed naturally. To do this, they studied magnetic ordering in the structure with tetrahedral crystal symmetry and used micromagnetic analysis to derive this new antichiral ordering.

”Thanks to this unconventional ground state, the proposed magnetic ordering might result in a rich family of magnetic phenomena including unique magnetic domains and skyrmions that are fundamentally different from chiral textures. This finding triggers further theoretical and experimental investigation in this type of magnetic materials,” Anastasia Pervishko concludes.