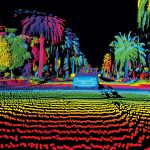 For industrial LiDAR, smart infrastructure and logistics are showing the highest growth, reaching $500 million each by 2026.

The logistics LiDAR market will reach $466 million in 2026 with a 23% CAGR during the same period again.

In smart infrastructure, smart city applications are expected to be most important segment to look at.

Security, highway monitoring and autonomous checkout are other important applications. In logistics, autonomous trucks and delivery robots are expected to have the most significant growth.

Revenues for the main large LiDAR companies declined in 2020.

Several Tier-1s are actively involved in LiDAR: Valeo in Audi cars, Continental with the flash LiDAR with the majority of design wins for Valeo.

This makes this company, by far, the leading LiDAR supplier in ADAS vehicles.

In 2020, the LiDAR in ADAS represented only 1.5% of the automotive and industrial LiDAR market. But the ADAS proportion is expected to reach 41% in 2026.

The growth in robotic cars, including robotaxis and autonomous shuttles, is expected to be less impressive but still important. This segment is expected to reach $575 million in 2026 with a 33% CAGR during the same period.

Since the invention of 3D real-time LiDAR by David Hall from Velodyne in 2005, more than 80 LiDAR companies have been established.

Many of them have bet on new technologies. This has resulted in high technological diversity in the LiDAR landscape. Despite this great diversity, the oldest technologies are still representing most design wins.

The 1550nm LiDAR wavelength is less dangerous to the human eye than 905nm and promises integration through the silicon platform.

However, 905nm represents 65% of design wins for the automotive industry.”

For the imaging method, traditional mechanical scanning represents 69% of design wins. MEMS micromirror and Flash LiDAR are also making their way into automotive, but their proportion is smaller.

In automotive LiDAR, of  the overall design wins made public, 8 have been created by Valeo.