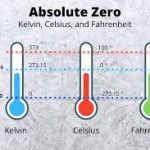 Measured as -273.15 °C (-459.67 °F), absolute zero is the coldest temperature possible on the thermodynamic scale – the point where there’s no atomic motion or heat at all

The researchers took a cloud of 100,000 rubidium atoms trapped in a magnetic field in a vacuum chamber.

They then cooled this down to form a quantum gas – a Bose-Einstein Condensate (BEC) – where the atoms begin acting essentially like one large atom, allowing quantum effects to become visible on the macro scale.

At two billionths of a degree above absolute zero, the team ran an experiment at the Bremen Drop Tower research facility, dropping the BEC trap 120 m (393.7 ft).

During the free fall, the team switched the magnetic field containing the gas off and on repeatedly.

When the magnetic field is off, the gas begins to expand, and when it’s turned back on the gas is forced to contract again. This switching slows the expansion of the gas almost to a complete stop, and reducing this molecular speed effectively reduces the temperature.

The experiment involved dropping a quantum gas, and switching a magnetic field on and off to bring its atoms to an almost complete standstill.

The record-breaking temperature lasted for up to two seconds, but simulations showed that it should be possible to maintain it for up to 17 seconds in a weightless environment.