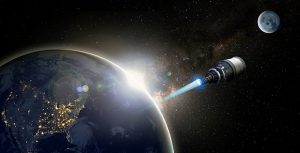 This is the region outside of Earth’s atmosphere to just past the moon’s orbit.

Specifically, the agency has awarded a contract to support the Demonstration Rocket for the Agile Cislunar Operations (DRACO) programme, which aims to demonstrate an NTP system on orbit by 2025.

Over the next 18 months, General Atomics says it will deliver a preliminary design of the NTP system “in order to demonstrate and ensure the system is operationally effective and able to be built and validated in low-earth orbit within the next five years”.

“We are excited to support DARPA in defining the next evolution of propulsion technology, critical to maintaining space domain awareness in the cislunar region and beyond,” stated Scott Forney, president of GA-EMS. “GA-EMS is uniquely positioned to support this effort because we have capabilities and heritage in both nuclear reactor systems and space systems, the combination of which is required to execute the DRACO mission.”

For mission-specific reactors, the company highlighted that it has 66 “TRIGA” (Training, Research, Isotopes, General Atomics) reactors around the world.

“GA-EMS’ expertise in state-of-the-art nuclear fuels and advanced materials are key components to the NTP design to create a highly efficient and exceptionally safe propulsion system,” said Dr. Christina Back, vice president of Nuclear Technologies and Materials at GA-EMS. “Combined with our in-house capabilities to fabricate these components and others, we can ensure delivery of a superior NTP reactor on orbit and on time.”

According to DARPA, the DRACO programme will have two tracks two tracks.

Track B is anticipated to culminate in a technology maturation plan review for the demonstration system, says the agency.