The improvement is shown in cone-mediated colour contrast thresholds, tested in people from 37 to 70 years old in this research.

Improvements have been seen before, using light at ~40mW/cm2, but this work used only 8mW/cm2.

Exposure was for three minutes within 8am to 9am. On average there was a 17% improvement in colour vision, which lasted a week in tested participants – the university warns that the data was noisy, with improvements varying widely.

The same test between 12pm and 1pm showed no improvement. 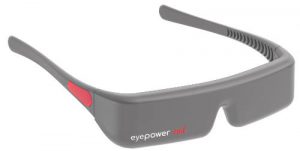 To make such light available, Imperial professor Glen Jeffery has worked (for no commercial gain apparently) with Wales-based Planet Lighting UK, which is creating a spectacles-like device that emits 670nm (right).

“The technology is simple and very safe; the energy delivered by 670nm long wave light is not that much greater than that found in natural environmental light,” said Jeffery. “Given its simplicity, I am confident an easy-to-use device can be made available at an affordable cost to the general public.”

According to Imperial, after around 40 and into old age, 30% of central rods in the eye die. Cones remain, but get weaker as time passes.