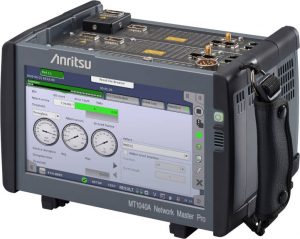 Activation is purchased as MT1040A-020, which will also enable measurment of four channels of 100Gbit Ethernet.

“As a result, since data Tx and Rx tests can be performed simultaneously, it is possible to both test networks as well as measure the latency and execute quality tests of 400GbE equipment efficiently using just one MT1040A unit. Additionally, testing of 200GbE used in data centers is also supported,” according to the company.

Networks from 10Mbit/s to 400Gbit/s can be handled, and tested for parameters bit error rate, throughput, frame loss and frame latency.

There is an automatic, one-button test function for pass/fail evaluation of multiple test results.

“With the start of 5G services and the spread of Cloud computing, as well as the rapid increase in teleworking, supporting increased network speeds and larger data capacities has become an urgent issue for communications network operators,” said Anritsu. “As a result, demand for 400GbE is increasing as a means to cope with reinforcement of these networks. However, configuring stable and high-speed, large-capacity networks using 400GbE requires careful attention to key points, such as assuring the quality of equipment prior to constructing the overall network.”