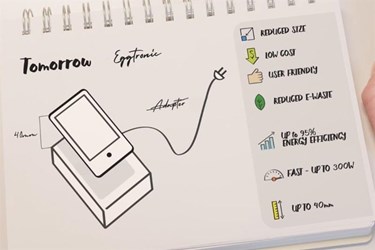 Eggtronic, a developer of power electronics, has announced E2WATT, an AC power technology that will help to boost the power, efficiency, charging distance and data transmission capabilities of wireless charging applications.

Traditional Qi wireless power is limited by distance (usually 5 mm), and maximum power (usually up to 30 W), however E2WATT technology is capable of reaching up to eight times further (to 40 mm) and can deliver up to 300 W – a significant breakthrough for inductive standards.

The E2WATT wireless technology is powered directly from AC mains, without the need for an external power supply. The single-stage hybrid design minimises losses compared with conventional double-stage wireless technologies to deliver significantly increased peak efficiencies of up to 95%.

“We developed the entire E2WATT wireless platform, from the concept to proprietary architecture and firmware, in order to overcome the limitations of standard AC power adapters and Qi wireless chargers, multiplying the number of applications and the usability of products based on Qi technology,” said Igor Spinella, CEO and founder of Eggtronic.

“The performance of E2WATT is enabled by the high-speed gallium nitride – or GaN – Semiconductor technology used in GaNFast power ICs,” added Stephen Oliver, VP Corporate Marketing at Navitas Semiconductor. “The Eggtronic team realised the limitations of legacy silicon chips and early discrete GaN with complex circuits and many discrete components. GaNFast power ICs are easy-to-use, ‘digital-in, power-out’ circuit building blocks which meant the expert team in Modena could focus on their proprietary, high-speed E2WATT topology and achieve a very fast time to market.”

“This is a hybrid AC wireless power solution which is both a power supply and a wireless charger, able to increase efficiency, power, distance, and reduce both size and complexity,” said Matteo Ovi, Head of B2B Sales at Eggtronic. “We can expand into new segments and products that were not possible before.”

“Our collaboration with Eggtronic has resulted in the development of a unique and differentiated Qi transmitter design for customers.”