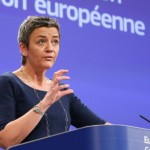 ‘The EU has opened an in-depth investigation to assess the proposed acquisition of Arm by NVIDIA under the EU Merger Regulation,” says the Commission, “the Commission is concerned that the merged entity would have the ability and incentive to restrict access by NVIDIA’s rivals to Arm’s technology and that the proposed transaction could lead to higher prices, less choice and reduced innovation in the Semiconductor industry.”

Executive Vice-President Margrethe Vestager, (pictured) responsible for competition policy, said: “Semiconductors are everywhere in products and devices that we use everyday as well as in infrastructure such as datacentres. Whilst Arm and NVIDIA do not directly compete, Arm’s IP is an important input in products competing with those of NVIDIA, for example in datacentres, automotive and in Internet of Things. Our analysis shows that the acquisition of Arm by NVIDIA could lead to restricted or degraded access to Arm’s IP, with distortive effects in many markets where semiconductors are used. Our investigation aims to ensure that companies active in Europe continue having effective access to the technology that is necessary to produce state-of-the-art semiconductor products at competitive prices.”