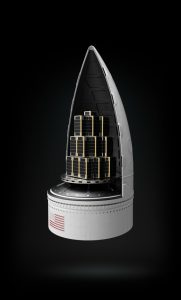 Euroconsult is a consultancy specialising in the space sector. Launched in 2017 as part of the World Satellite Business Week, its Finspace pitch initiative “recognizes and celebrates the most promising start-ups and forward-thinking innovators and disruptors across the entire space and satellites value-added chains”.

Entries were submitted from all across Europe, the United States, and Australia, said the company. Approximately one third of this year’s entries represented small launch development companies.

In July, R3 IoT was announced as one of the winning entries in OneWeb’s Innovation Challenge 2021, for combination of satellite communications technology with the IoT.

Of the six finalists, two companies will receive a Finspace award. One will be awarded for Satellite Financing, and one for Earth Observation. The six finalists, described by Euroconsult, are:

ReOrbit is a Finnish startup whose vision is to enable a new generation of space applications by transforming traditional single-use satellites into reusable, autonomous, and networked systems that can be configured for different applications including in-orbit manufacturing and from-orbit servicing.

One of two finalists based in the United States, Phantom Space Corporation offer launch services, small satellite design and build, and space-based network services, and seeks to drastically reduce space access costs through mass production of small launchers and satellites.

This Spanish company is leading the mobile to satellite IoT integration. Sateliot is building the first LEO constellation based on the standard 5G protocol, same used for cellular connectivity that allows commercial unmodified Nb-IoT devices to roam seamlessly between mobile networks and Sateliot’s satellite constellation.

This Australian startup helps satellite operators and governments monitor their satellites and other objects in space. They image these objects at close range by renting unused time on existing Earth Observation satellites, and applying their own software.

Scottish-based, R3-IoT is on a mission to digitise the planet – providing value extending beyond connectivity. Its full-stack platform combining satellite, cellular, IoT, analytics and cybersecurity provides data-driven intelligence from anywhere in the world, 24/7 – regardless of available infrastructure.

The second US company to be shortlisted, Edgybees AI Software brings visual intelligence to geo-spatial imagery, accurately and in real-time to save lives and make critical decisions.

The winners will be announced at the World Satellite Business Week event, which takes place 13–16 December 2021 both in virtual format and physical attendance in Paris.

You can read more about the Finspace competition here. And see the previous winners here.