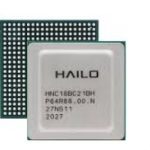 AI chipmaker Hailo today announced it has raised $136 million in a Series C funding round led by Poalim Equity and Gil Agmon.

Mooly Eden, a former Intel svp will join Hailo’s board of directors, and Eyal Waldman, Co-Founder and former CEO of Mellanox Technologies, will join its advisory board.

The round brings Hailo’s total funding to $224 million.

The  funding will  allow the company to develop its next-generation products and expand into new and existing markets.

Hailo has been  expanding its product line, recently launching both its M.2 and Mini PCIe high-performance AI acceleration modules for edge processing.

The company has has doubled its customer base to 100  over the last two fiscal quarters of 2021.