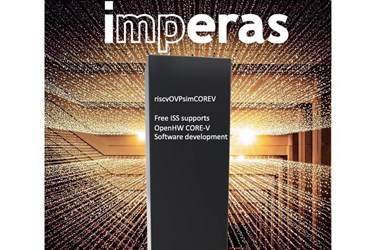 Imperas Software, a specialist in virtual platforms and high-performance software simulation, has made available the first release of riscvOVPsimCOREV as a free ISS (Instruction Set Simulator) based on its reference models of the OpenHW Groups processor RISC-V core IP.

An ISS is the essential starting point for software development tasks of algorithm, application, and tool writing. riscvOVPsimCOREV can be configured for the complete range of the OpenHW CORE-V processor IP portfolio, including the RTL-frozen CV32E40P (formally known as PULP RI5CY), the under-development CV32E40S and CV32E40X, plus the upcoming CVA6-32/64 bit (formally known as PULP ARIANE), and will be extended overtime to cover the future roadmap of CORE-V.

An ISS is a software based representation of a processor that can be used to test and develop software on a standard host x86 PC machine. Its main advantages over a traditional hardware development platform are the ease-of-use features that help the programmer with debug, control and visibility of code running in simulation.

With new processor IP cores, the ISS is an essential tool to support the development of software before silicon or hardware implementations are available. Many developers rely on a broad set of tools for software development that are packaged as an IDE (Integrated Development Environment). Typically, an IDE includes utilities and supporting technologies such as compiler, debugger, ISS, and other productivity tools.

To support integration with IDE’s and other software design methodologies such as CI/CD (Continuous Integration and Continuous Deployment) platforms, riscvOVPsimCOREV features configuration and interface options such as debug port and trace to allow easy integration.

“High quality IP is an important deliverable that others can build on, but developers need more than just processor RTL to support high quality implementations,” said Arjan Bink, Silicon Laboratories, and chair of OpenHW Cores Task Group. “All embedded software is closely related to the IP core it will run on; thus, an accurate ISS reference model is essential for all HW and SW adopters. riscvOVPsimCOREV is the key starting point for the support of the OpenHW CORE-V cores by the ecosystem.”

“The defining goal of the OpenHW group is to deliver high quality open source IP cores, by leveraging the leading verification methodologies compatible with the established EDA commercial SoC design flows,” said Rick O’Connor, President & CEO OpenHW Group. “To support our world class IP portfolio, the OpenHW working groups are enabling adoption with tools and software support for CORE-V processors. The Imperas contribution with the new free ISS, riscvOVPsimCOREV will be the foundation reference to all software tasks.”

riscvOVPsimCOREV is a free RISC-V reference model and simulator (ISS) that includes a proprietary freeware license from Imperas, which covers free commercial as well as academic use.

The simulator package also includes a complete open-source model licensed under the Apache 2.0 license, and is available for download now.