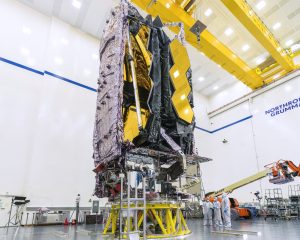 Specifically, the replacement for the Hubble Telescope – a joint NASA, European Space Agency (ESA) and Canada Space Agency (CSA) – will now be shipped to its launch site at Europe’s Spaceport in French Guiana.

Tests were carried out at Northrop Grumman’s facilities in California to ensure that the space science observatory will operate as designed when in space. Shipment operations have also now begun, for example, all the necessary steps to prepare Webb for a journey through the Panama Canal to its launch location.

“We are glad about the completion of all tests for Webb and thank all the teams for their excellent work. We are really excited that all the items necessary for the launch are now coming together at Europe’s Spaceport,” said Günther Hasinger, ESA Director of Science.

The upper stage of the Ariane 5 rocket which will launch the James Webb Space Telescope is also on its way to French Guiana, from ArianeGroup in Bremen.

Due to launch later this year, once the observatory has cooled down and stabilised at its space operating temperature, several months of alignments to its optics and calibrations of its scientific instruments will follow. ESA says scientific operations are expected to begin approximately six months after launch.

ESA describes the steps involved in the commissioning period:

“Moments after completing a 26-minute ride aboard the Ariane 5 launch vehicle, the spacecraft will separate from the rocket and its solar array will deploy automatically. Immediately after Webb separates from the rocket, ESA’s tracking station network, ESTRACK, will follow the Early Orbit Phase operations using its Malindi ground station in collaboration with NASA’s station network.

“Webb will take one month to fly to its intended orbital location in space nearly one million miles away from Earth, slowly unfolding as it goes. Sunshield deployments will begin a few days after launch, and each step can be controlled expertly from the ground, giving Webb’s launch full control to circumnavigate any unforeseen issues with deployment.”

During the first month in space, on its way to the second Langrange point (L2), the telescope will undergo a complex unfolding sequence.

The sequence will involve unfolding Webb’s sunshield (a five-layer, diamond-shaped structure the size of a tennis court) and the 6.5-metre wide mirror (consisting of18 hexagonal, gold-coated mirror segments). See below. 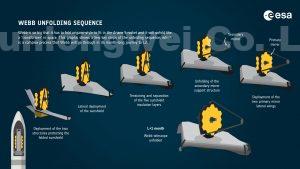 Webb’s partners are working towards a launch readiness date of 31 October 2021, but this will be confirmed closer to the date.