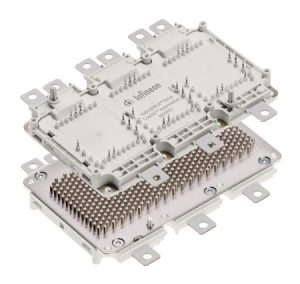 The HybridPACK Drive CoolSiC is a full-bridge module with 1200 V blocking voltage optimized for traction inverters in electric vehicles (EV).

The power module is based on the automotive CoolSiC trench mosfet technology for high-power density and high-performance applications.

The HybridPACK Drive was first introduced in 2017, using Infineon’s silicon EDT2 technology, specifically optimized to deliver the best efficiency on a real-world driving cycle. It offers a scalable power range of 100 kW to 180 kW within the 750 V and 1200 V class.

The power module offers an upscale path from silicon to silicon carbide with the same footprint. This allows the inverter design to achieve higher power of up to 250 kW in the 1200 V class, greater driving range, smaller battery size and optimized system size and cost.

In order to offer an optimal cost-performance ratio for different power levels, this product is available in two versions with different chip counts, resulting in either a 400 A or 200 A DC rating version in the 1200 V class.

The first-generation of CoolSiC automotive MOSFET technology is optimized for use in traction inverters, with a focus on achieving the lowest conduction losses, especially under partial load conditions. Combined with low switching losses of silicon carbide MOSFETs, this enables an efficiency gain in inverter operation compared to silicon IGBTs.

Automotive CoolSiC MOSFETs are designed and tested to achieve short circuit robustness and a high degree of cosmic ray and gate-oxide robustness, which is key for designing efficient and reliable automotive traction inverters and other high voltage applications. The module is qualified to AQG324,