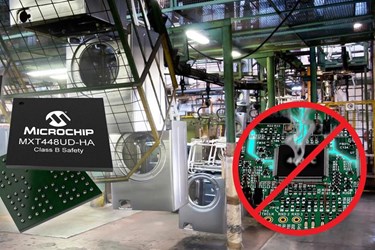 Microchip Technology has said that it is adding two new members to its family of IEC/UL 60730 Class B certified touchscreen controllers.

The MXT448UD-HA and MXT640UD-HA devices extend the Class B portfolio beyond 10 inches, providing dedicated solutions for larger screen sizes as well as scalability to customers.

Networked and connected home appliances are becoming increasingly popular and displays and touch sensors are seen as being essential when it comes to enabling this functionality in modern appliances.

Both devices are compliant with the IEC61000-4-6 Class A specification for conducted noise immunity up to 10 Vrms (level three for industrial uses) enabling products with a touch screen interface to function in very harsh factory environments where electromagnetic interference can be caused by conveyer belts, power rails or assembly machinery.

Manufacturers of home appliances will benefit from an increased reliability and production yield. This, according to Microchip, is a big improvement for consumers using unprotected touchscreens on an oven or washing machine that may result in concern for false or missed touches caused by electromagnetic interference from unshielded power transmission, electric motors, and neighbouring electrical equipment.

Touch events are provided to both processors at the same time and this unique architecture helps to shorten time to market and reduces development costs by allowing all safety-critical firmware to be developed on a dedicated safety-certified MCU (with mandatory source code review by an IEC/UL test lab) separate from the main processor running the appliance’s Graphical User Interface (GUI).

“As products add more controls via a touch screen, the interface must work reliably to both satisfy and protect users,” said Clayton Pillion, director of Microchip’s human machine interface business unit. “maXTouch technology delivers outstanding noise immunity performance allowing for safe and robust operation throughout its lifetime. We have worked closely with customers to deliver the first functional safety touch controller families and are seeing high adoption where noise immunity is critical to a successful product.”

In addition to the IEC compliances, both devices support an operating temperature up to 105°C, which is a key requirement for cooktops and ovens where the Human Machine Interface (HMI) system is near heating elements.