Kemet, part of the Yageo Group, has introduced two new series of high-performance supercapacitors for automotive electronics. The FMD and FU0H series delivers 1,000 hours at 85°C/85% RH-rated voltage with the FMD series claiming the highest lifetime with up to 4,000 hours. 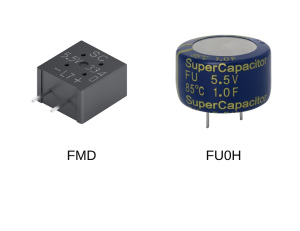 Kemet’s miniature supercapacitors use a proprietary aqueous electrolyte solution that is said to provide high durability against liquid leakage, vibrations, and thermal shock, making them highly reliable in harsh environments. In addition, the aqueous electrolytes are highly conductive, have a low environmental impact, and are non-toxic and non-flammable.

Other benefits cited include full charging within seconds, compared to a secondary battery cell that takes from ten minutes to several hours to fully charge, and no theoretical life cycle limit, compared to a lifetime of about 500 cycles for a lithium-ion secondary cell. In addition, supercapacitors exhibit a greater resistance to moisture absorption than organic compounds, resulting in a longer life with better stability, said Kemet.

“Supercapacitors are ideal for maintaining the main power system’s real-time clock or volatile memory when it is removed, such as during a power failure or when the main power system’s battery has been removed for replacement,” said Kemet. “The supercapacitor’s benign open-circuit failure mode contrasts with typical short-circuit battery failures that may result in outgassing or ignition.”

As an alternative to small backup batteries, they can store enough energy to provide backup ranging from a few seconds to several hours, depending on the type of load and current demand, said the company.

Available through Kemet’s distributors, the AEC-Q200 certified supercapacitors are manufactured in an ISO TS 16949 certified plant and are subjected to PPAP/PSW and change control. The devices are RoHS compliant.