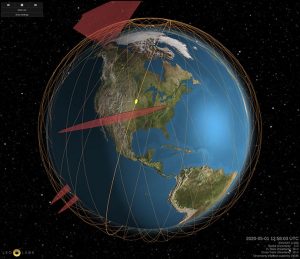 The space monitoring, cloud-based system will enable New Zealand to better meet the responsibilities of a launching state, says the Ministry of Business, Innovation and Employment (MBIE). This includes monitoring the satellites launched and making sure that they are complying with the licence and rules that permitted the launch.

It will also use data from LeoLabs’ global radar network, one of which is based in Naseby (in Central Otago, South Island), to continuously monitor satellites and space debris in low Earth orbit.

“Our partnership with LeoLabs has allowed us to better understand what’s in space, which is key to upholding our duties as a launching country and ensuring the responsible use of the space environment,” says Dr Peter Crabtree, General Manager Science, Innovation and International at New Zealand’s Ministry.

LeoLabs has previously been active in New Zealand, working on the Kiwi Space Radar (KSR), the third radar in the company’s global radar network. The Phased Array Radar (above) is based on LeoLabs’ S-band technology and consists of multiple one-dimensional phased array radar systems. It is sensitive to small, previously untracked space debris.

“We appreciate the opportunity now to take [our investment and activities in New Zealand] to another level and operationalise the Space Regulatory and Sustainability Platform,” said said Dan Ceperley, CEO and co-founder of LeoLabs. “This is truly a model for every other space agency around the world.”

The space sector in New Zealand is reportedly worth NZD$1.75 billion according to a Deloitte report commissioned by the MBIE (which is more than the NZ$1.5 billion a year of its wine industry, according New Zealand Tourism).

LeoLabs was founded in 2016 as a venture-funded spinout of SRI International, helping to secure Low Earth Orbit (LEO) via a global radar network and data services platform.