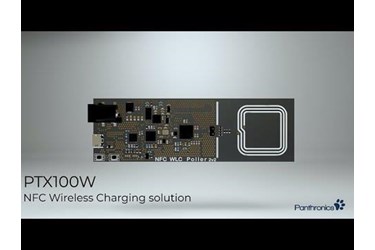 Using the reference design, manufacturers of portable and wearable devices such as earbuds, smart watches, activity monitoring wristbands and smart glasses will be able to quickly and easily implement the hardware and software for an NFC wireless charging system including both the PTX100W-based poller (charging station) and the listener (device), which features a standard NFC tag.

As a consequence OEMs building NFC wireless charging capability into new product designs will be able to take advantage of the performance and features of the PTX100W, which includes:

The SDKs include source code for the NFC protocol software, and firmware for controlling charging operations.

As well as the PTX100W NFC controller from Panthronics, the reference design also includes microcontrollers from Renesas for system control in the poller and listener circuits, and an Infineon NFC tag on the listener side.

The reference design has passed full system validation tests of both the hardware and software.

Commenting Mark Dickson, Chief Marketing Officer at Panthronics, said: ‘NFC wireless charging is emerging as the preferred technology for wearable devices because it allows for a small, low-cost antenna and flexible antenna positioning, while supplying up to 1W to the battery, provided the system uses the PTX100W. With this new reference design, Panthronics has now made the technology simple for device manufacturers to implement both in the charger and the device, reducing development effort and accelerating customers’ time to market.’