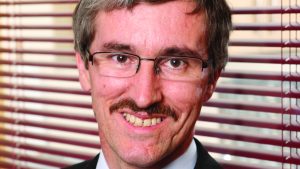 The chip goes into the Radio Unit and the Distributed Unit of an O-RAN mobile telecoms network.

“It converts radio waves into bits,” is how Picocom founder and president Peter Claydon (pictured) describes what the chip does.

“Doing it with standardised hardware – standard processors and FPGAs – is too difficult,” says Claydon, “anyone who has been successful at this uses optimised hardware. O-RAN is difficult – it needs optimised SoCs and this is what Picocom is doing.”

Trial O-RAN networks have already been deployed in countryside locations. “It’s starting with smaller deployments in rural areas and then it will move into town centres,” says Claydon.

Spawned in the heat of the Huawei debate, when the Chinese switchgear manufacturer was being banned from networks across the world, O-RAN was conceived as the alternative to having only two vendors of network equipment – Ericsson and Nokia – both of whom supplied end-to end, fully integrated systems.

O-RAN was devised by operators, and supported by governments, as a disaggregated network supplied by multiple vendors supplying different network components which are compatible with eachother.

Some of the people have come from Claydon’s previous startup, Picochip, and some have come in from  other areas. “A lot of the Chinese Picochip people moved to Picocom,” says Claydon, “ the engineering is being done in Bristol and Beijing.”

Picochip had a design centre in Beijing helping design chips for femtocells.  The company won 70% of the market for chips for femtocells before being sold to Mindspeed of the US for $75 million and the  femtocell experience is particularly useful for Picocom because small cells will be the initial route by which O-RAN gets into  the market.

“O-RAN will happen initially in small cells because operators don’t want to take too much of a risk,” says Claydon.

For the moment, the Qualcomms and Broadcoms are not involved, leaving the field open for entrepreneurs. “It’s not such a big deal for Qualcomm,” says Claydon, “the market is not big enough.”

Asked what tempted him back into the startup game Claydon says : “It’s more exciting than anything else.”

The work – converting radio waves into bits – is also an attraction.

“I just like doing interesting things,” says Claydon, “investors like to think you’re motivated by making lots of money but, with engineers, if you’re paid enough money, you don’t want lots of money, you want to make a difference.”