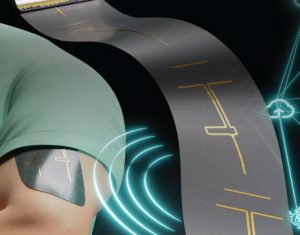 Researchers at King Abdullah University of Science and Technology (KAUST) have developed a dielectric ink from the polymer ABS and ceramic particles.

By screen-printing it onto glass, and then peeling off the dried result, flexible large-area dielectics of tunable thickness and permittivity can be made, as thin as a few microns and with a dielectric loss of 0.0063 at 28GHz.

To go with the dielectic, a screen-printable silver nanowire-based ink is has been created that results in 3.4 x 106S/m conductors that are stable when bent or folded.

“Furthermore, they retained their performance when incorporated into a four-layer circuit consisting of alternating metal-patterned and dielectric layers,” according to KAUST. “This suggests that the screen-printable inks can be used in multilayer structures, such as multilayer printed circuit boards and automotive radars.”

Both inks are compatible with roll-to-roll processing, according to KAUST researcher Weiwei Li, and IoT and wearables are potential applications.

“We expect fabrication costs to be extremely low, to the extent that the devices will become disposable,” said researcher Atif Shamim.