The Ensemble and Crescendo devices claim low power consumption for AI-enabled IoT applications. Measured at the device pin, operating at 3.3 V, power consumption in stop mode is less than 1.0 µA with the real-time clock running and wake sources active. In run mode, power consumption is 18 µA/MHz on the Cortex-M55 running ‘useful’ code from the SRAM.

The new family of embedded controllers also share a common “fabric” bus structure, peripherals, firewalls, power management, and interrupt handling, as well as other features, which makes it easier for the company to create derivative devices, said Alif. It also makes it easier for designers and developers to re-use software across projects.

“We founded Alif Semiconductor because we wanted to provide an integrated next  generation solution for developers that need efficient AI, wireless capabilities, trusted security and long battery life,” said Syed Ali, Alif Semiconductor co-founder and CEO, in a statement. “This just didn’t exist until now. We expect the Ensemble and Crescendo families will have a significant impact on the market for next-generation IoT devices.”

These families scale from single CPU to quad CPU core devices with with AI/ML acceleration. See table below. 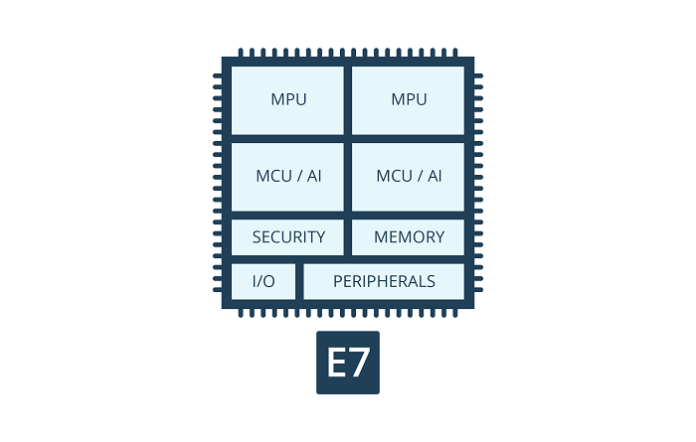 The Ensemble devices also include advanced on-chip security that provides multiple layers of security, such as device integrity protection, secure identity, root-of-trust, and secure lifecycle management. This includes a separate security subsystem, such as a secure element with its own CPU core and memory with immutable secure key storage and secure cryptographic hardware acceleration.

Developers can choose to use a subset of the security features, but once enabled, they remain in effect through the entire life cycle of an end-product, said Alif. 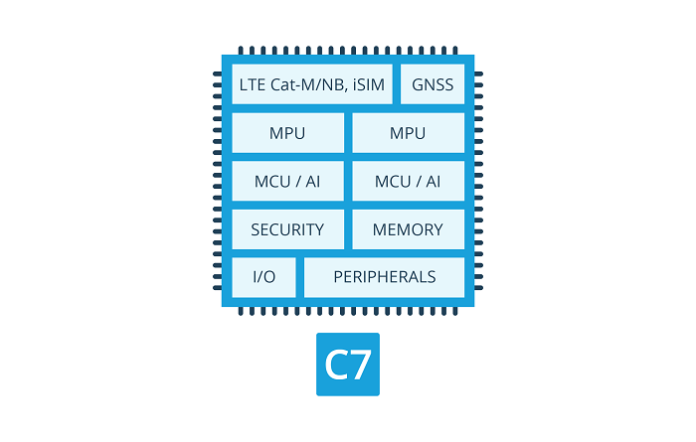 The cellular radio supports global bands and includes two RF PAs for low- and high-band ranges, which are integrated monolithically on the die. This eliminates the need to use external PA components, reducing the bill of materials, said Alif.

In addition, very few external components are required to complete the RF design all the way to the antenna, and because the devices include ample on-chip memory and complete power management, there is no need to use external memory devices in most cases, or a power management IC, said the company, which means the RF modules are smaller and less complex.

“The Ensemble and Crescendo families introduce a scalable, highly integrated architecture  that lets developers create secure solutions spanning multiple applications, with  different functional and processing requirements on a common fabric,” said Reza  Kazerounian, Alif Semiconductor co-founder and president, in a statement. “The innovative approach we are  taking is a game-changer and will disrupt the way developers create intelligent machines.”

The company also introduced its exclusive Autonomous Intelligent Power Management (aiPM) technology that allows for fine-grained control of resources in the chip, which powers on only sections of the chip when needed. “This makes even our complex quad-core devices behave like small purpose-built low-power MCUs when they need to to extend battery life,” said the company.

In addition, Alif architected the multi-core devices to dedicate the pair of Cortex-M55 MCU/Ethos-U55 NPU to operate at very low power levels while sensing the surroundings such as vibration, sound, and images. “The Cortex-M55 MCU will then wake up other portions of the device (Cortex-M55/Ethos-U55, Cortex-A32s, graphics, etc.) in an escalated way as needed to execute the workload based on the immediate use case,” said the company.

Delivering low-power operation, the aiPM technology enables smart devices to last longer on smaller batteries. It targets battery-powered IoT devices particularly in applications where there is a high requirement for local processing, AI/ML, and wireless communication.

Ensemble and Crescendo devices are sampling now to lead customers. Software, development tools, and kits are available. The company will release performance and efficiency data when production qualification is complete in the first quarter of 2022.