Low-cost single board computers (SBCs) are a key building block in all stages of new product development and production, according to a survey of nearly 1,500 engineers, designers, and makers using SBC solutions, conducted by Newark, an Avnet company. A key finding reveals that 50 percent of professional engineers surveyed used SBCs for industrial and internet of things (IoT). 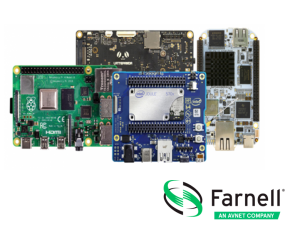 A key goal for using SBCs, according to the engineers, is to reduce time to market. The most popular board is Raspberry Pi (44% of professional user respondents), followed by Arduino (28%), and Beagleboard (6%). The survey also indicates that Raspberry Pi users are the most loyal and less likely to use other SBCs. Seventy-five percent of respondents were professional users compared with 25 percent who were hobbyists and makers.

Interestingly, the use of Raspberry Pi and Arduino have a similar market share for makers, suggesting engineers like to use a board they are familiar with from home projects, said Newark.

The survey also revealed that SBCs are being used in all stages of product development and production. Twenty-three percent of respondents use SBCs for proof of concept and 35 percent for prototyping. In addition, 22 percent of respondents said they use low-cost SBCs in production units, with around 20 percent of these products produced in volumes of 5,000 or more per year, and 20 percent used for developing test equipment and testing.

“The use of SBCs in prototyping provides opportunities for engineers to significantly reduce computing costs and get new products to market much faster,” said Romain Soreau, head of single board computing at Newark, in a statement.

The survey also found that 20 percent of engineers are using artificial intelligence (AI) and machine learning in their SBC applications. However, high-performance AI and more memory were the most common requests for SBC improvements cited by survey respondents.

About 24 percent of professionals build their own boards for use with the SBC, indicating the benefits of a standard compute platform with custom I/O or interface electronics, said Newark. In addition, the survey also found that professional users are more likely to have customized boards compared to makers.

Other key findings indicate that touchscreens are the most popular accessory as well as cameras and kits for improving power supply via batteries or solar panels.

Newark offers a range of core SBC platforms and toolkits from leading brands including Raspberry Pi, Arduino (Portenta H7), Intel (NUC range), and Industrial Shields. These are available through Newark in North America, Farnell in EMEA, and element14 in APAC.