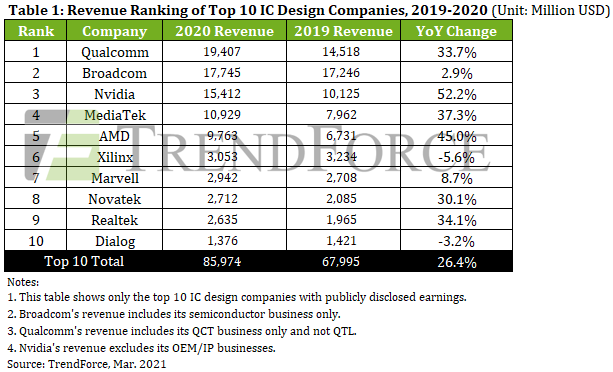 Qualcomm overtook Broadcom because of the demand surge for network devices and Apple’s decision to once again adopt Qualcomm’s baseband processors.

Novatek’s revenue grew by 30.1% YoY, as the US-China trade war and the stay-at-home economy brought about by the pandemic resulted in strong sales of its driver ICs and TV SoCs.

Realtek benefitted from the high demand for its various offerings, most notably networking products and notebooks, although sales of its audio products and Bluetooth chips were also respectable. Realtek’s revenue increased by 34.1% YoY.

Capitalising on the capacity limitations of Intel’s 10nm process, AMD made significant inroads in the notebook, desktop, and server CPU markets, resulting in a $9.7 billion revenue, a remarkable 45% increase YoY.

Although Xilinx’s revenue declined by 5.6% YoY in the wake of the US-China trade war, recent QoQ changes in Xilinx’s revenue show that the company is well on its way to recovery going forward.