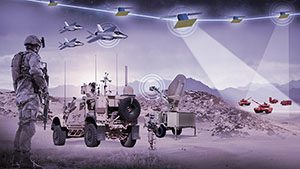 The new military satellites – based on Lockheed Martin’s LM 400 bus – are intended to provide both “global and persistent support” for tactical military forces, taking advantage of space-based capabilities.

The company highlights that the mid-sized satellites follow open standards such as Open Mission System (OMS) and Universal Command and Control Interface (UCI). They can also carry out new mission commands in orbit, via the software-defined capabilities of the company’s SmartSat platform.

The LM 400 can support payloads up to 14 kilowatts and up to 3,300 pounds (1,500 kilograms) of mass. This enables extended operation of a wide-range of sensor technologies, says Lockheed Martin.

“Digital engineering and manufacturing are accelerating our ability to deploy robust, future-focused constellations that feature leading-edge technology for our customers’ missions,” said Rick Ambrose, executive vp of Lockheed Martin Space. “Our LM 400 is a highly adaptable, mid-sized satellite and yet can be produced at scale in a rapid and cost-effective manner.”

The LM 400-based tactical ISR satellites are planned to play a key role in Joint All-Domain Command and Control (JADC2).

It is also developing and building 10 space vehicles over the next two years for the Space Development Agency’s (SDA) Transport Layer Tranche 0, cited as the backbone of JADC2, “enabling even more connectivity between ISR and warfighters”.