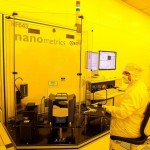 TSMC’s relatively muted growth was mostly caused by a power outage that occurred in TSMC’s Fab14 P7, located in the Southern Taiwan Science Park, in April.

The power outage subsequently caused some wafers at the 40nm and 16nm nodes to be discarded.

After recovering from the winter storm that swept Texas in February, Samsung’s Austin-based Line S2 fab fully resumed its manufacturing operations in April.

The fab is now operating at fully loaded capacities by manufacturing for additional client orders in order to compensate for the 1.5-month loss in wafer input from idling as a result of the winter storm.

Although the sharp drop in wafer input in 1Q21 somewhat constrained Samsung’s output and revenue growth for 2Q21, the foundry still managed to post a 5.5% QoQ revenue growth thanks to strong client demand for CIS, 5G RF transceivers, and OLED driver ICs.

In response, UMC continued to raise its quotes. In addition, newly installed production capacities at the 28/22nm nodes, which have a relatively high ASP, gradually became available for wafer input in 2Q21, resulting in a 5% QoQ increase in UMC’s blended ASP for 2Q21.

The foundry saw its market share remaining relatively unchanged from the previous quarter at 7.2% and posted a revenue of US$1.82 billion, an 8.5% QoQ increase. 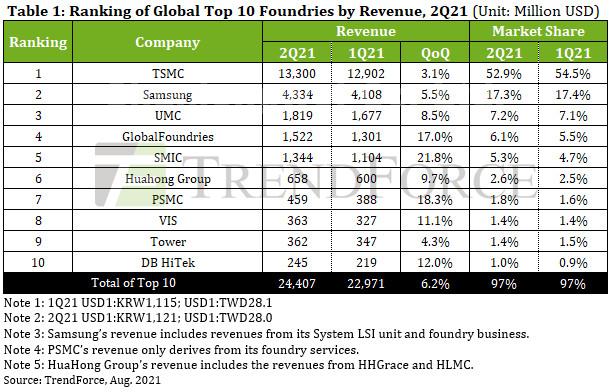 Fourth-ranked GlobalFoundries posted a revenue of US$1.52 billion for 2Q21, a 17.0% QoQ increase.

After selling its US-based Fab10 and Singapore-based Fab3E to ON Semi and VIS, respectively, in 2019, GlobalFoundries has been gradually consolidating its existing product lines and focusing on the development of 14/12nm FinFET, 22/12nm FD-SOI, and 55/40nm HV and BCD technology platforms.

At the same time, GlobalFoundries has also announced that it will expand its current production capacities by building new US-based and Singapore-based fabs, which are expected to contribute to GlobalFoundries’ earnings starting in the 2H22-2023 period.

On the other hand, although GlobalFoundries has already sold its Fab10 to ON Semi, the former continues to manufacture products for the latter at Fab10 across the 2020-2021 period.

ON Semi will not independently operate the fab until the transfer of ownership is finalized in 2022.

SMIC’s growth took place due to strong client demand for various technologies including 0.15/0.18µm PMIC, 55/40nm MCU, RF, HV, and CIS, as well as a continued increase in its ASP. Owing to better-than-expected adoption of its 14nm technology by new clients, SMIC is operating at a fully loaded capacity of 15K wspm at the moment.

Not only is HH Fab7’s production capacity of 48K wspm currently fully loaded, but HuaHong Group’s 8-inch fabs have all been operating at a capacity utilization rate of more than 100%.

After leapfrogging Tower in the revenue rankings in 1Q21 for the first time ever, PSMC maintained its strong growth in 2Q21 partially owing to continued wafer starts for specialty DRAM, DDI, CIS, and PMIC in its P1/2/3 fabs.

At the same time, there was a massive hike in demand for automotive chips, such as IGBT, manufactured at PSMC’s Fab 8A and Fab 8B. In view of quarterly increases in PSMC’s overall ASP, the foundry posted US$459 million in revenue for 2Q21, an 18.3% QoQ increase, and took the seventh spot in the rankings.

VIS benefitted from a host of factors in 2Q21, including persistent demand for DDI, PMIC, and power discretes; newly installed capacities in the Singapore-based Fab3E ready for production; adjustments in the foundry’s product mix; and an overall ASP hike. VIS’ revenue for 2Q21 reached US$363 million, which represented not only an 11.1% QoQ increase, but also the first time VIS overtook Tower in terms of revenue.

Although ninth-ranked Tower benefitted from stable demand for RF-SOI products, industrial PMIC, and automotive PMIC, the foundry’s newly installed capacities were not entirely ready for mass production, and its revenue therefore underwent a modest 4.3% QoQ increase for 2Q21 to US$362 million.

On the other hand, DBHiTek had been operating at fully loaded capacities for more than 18 months. While client demand for PMIC, MEMS, and CIS products manufactured with 8-inch wafers made consistent contributions to the foundry’s earnings, most of DBHiTek’s revenue growth for 2Q21 took place due to the rise in its ASP. DBHiTek’s revenue for 2Q21 reached US245 million, a 12.0% QoQ increase.

As of 3Q21, the shortage of foundry capacities that began in 2H19 has persisted and intensified for nearly two years.

TrendForce  believes that the combined revenues of the top 10 foundries will reach a record high in 3Q21.